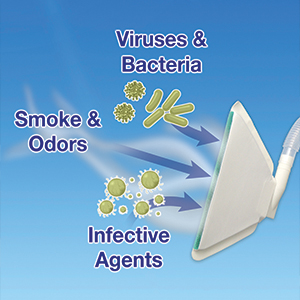 10 May The Evolution of Smoke Evacuation

Prior writings have revealed our belief that the meaning of the term, “smoke evacuation” has evolved well beyond meaning a method for capture of trace gases and particulates produced as a result of pyrolysis of tissue. As our teachings indicate, based upon third party testing of our miniSQUAIR,1 we now know that if paired with adequate suction, the device will also capture nanoparticles (80% of the plume)2 that have been shown to cause serious systemic diseases if chronically inhaled.3 Further, other independent laboratory studies have indicated that the same device, again when paired with suction capable of moving at least 25-35 cfm of air, will also capture airborne transmitted bioaerosols and, to a lesser but still significant degree, droplet transmitted bioaerosols.4

To wit, doctors at the Hospital for Special Surgery in New York City recently reported on bacterial cultures taken in 54 posterior spine surgery patients which revealed viable bacteria to be present at all wound levels when cultured immediately after the incision was made. Cultures were positive in 33% of patients.5 This study was reported at the 18th annual ISASS meeting in Toronto, April 11-13. I believe it to be a pivotal study that explains the relationship between the contamination source and post-operative wound infection rates.

Our group, recognizing this possible link, studied 281 posterior lumbosacral fusion patients without use of the miniSquair vs. 182 cases with the device and the concomitant use of intra-wound Vancomycin powder over a four year period in a single surgeon’s practice. The results exceeded what was anticipated with powder use alone with a 39% decrease in the superficial wound infection rate (2.85 vs. 1.10%) and a 31% drop in the deep wound infection rate (!.78% vs. 0.56%).6 This study was presented as a poster at the same Toronto meeting mentioned above. Although the data did not reveal significant differences, we believe the trend is obvious and that larger numbers of patients will provide assurances that effective smoke evacuation will soon be accepted as an adjunctive form of infection control…assuming that any device used for smoke removal has the kind of minimal smoke capture efficiency that has been defined in ISO 16571:2014 as 90% or greater.7