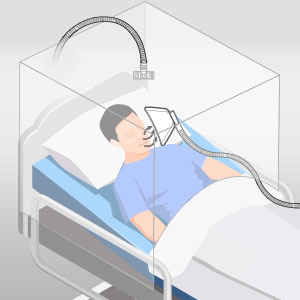 A Simpler Solution for Increased Safety of the COVID-19 Caregiver

After pivoting our efforts to COVID-19 issues and how to increase safety for the caregiver, it was only natural that we would survey what others have offered. Just to review our contribution briefly…we suggested placement of the infected patient in an isolation “tent” of clear plastic to contain the expelled virus which would be captured with our miniSQUAIR® which is  connected to an ULPA filter and smoke evacuator to remove the aerosol as it was produced. Should the patient require assisted respiration, then a CPAP or BIBAP face mask could be used by the patient within the tent with the expired aerosol removed by the miniSQUAIR®.

The alternative to this simple solution which uses readily available components was brought to my attention while surfing the internet. I saw an article about efforts to treat COVID-19 patients at a hospital in Lancaster, California. It was a multidisciplinary collaborative effort that resulted in a patient isolation hood that simulated a CPAP ventilation system. The device was displayed in a photo with the President along with the principles involved in its creation. It was described as a clear plastic hood to be placed over the head and neck of the patient in need of pressurized oxygen which was instilled through a side-nozzle with the exhaled aerosol exiting through another nozzle into what was likely an end-stage filter for virus entrapment. This marvel of engineering was to be used on about 50 patients at the hospital who would, presumably, stay within the rigid “bubble” for an extended period of time.

Contrast this scenario to having a patient’s upper torso in a roomy tent with the head and neck placed on soft pillows. The oxygen and/or mist would be gently instilled through a hole in the top of the tent and dispersed without directing the flow toward the patient’s face. The aerosol is constantly removed with the miniSquair® under suction. Should oxygen under pressure be required, then a CPAP mask can be worn by the patient while within the tent enclosure and the tubing led out beneath the flap provided. The aerosol is removed as previously described. The roominess of the tent should off-set any sense of claustrophobia and the patient remains in a natural posture. 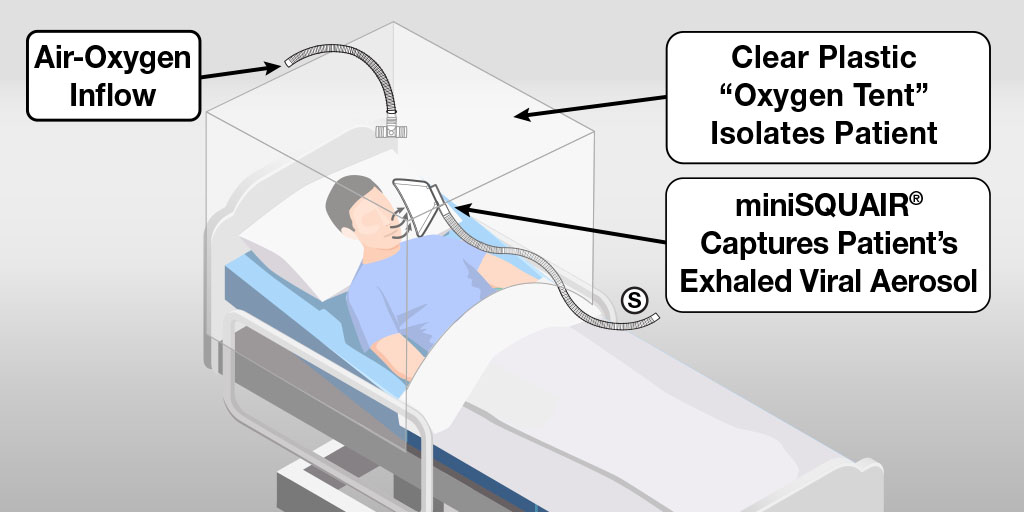 Clearly, technology created an elegant solution to a clinical problem, but wouldn’t a simpler solution based on patient concerns and comfort be a reasonable alternative?