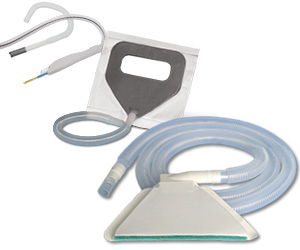 06 Jul From Vacuum Cleaner to Compliance – Our Journey

The achievement of capturing and removing surgical plume has proven to be an evolutionary and not a revolutionary effort. The journey from a simple vacuum hose to a stylized electrosurgical (“ESU”) “pencil” to a transformative cell foam-based flat plenum or pad placed close to the wound, has taken thirty-three (33) years to complete. Hard to believe but true!

During this time, the focus of smoke capture expanded to what would be acceptable characteristics for the turbine (“smoke evacuator,” local exhaust ventilator”) that would produce the suction needed to draw the plume to the orifice of the capture device. From the original vacuum canister to the bulky, noisy stand-alone units to the quieter, smaller, lighter and more powerful units of today with some incorporated into fluid management and “tower” units, has taken almost as many years.

Why so long for adoption? There are many reasons but foremost has been the paucity of research that could have informed clinicians of the deleterious effects of chronic inhalation of surgical plume and the reluctance of surgical journal editors to publish such articles. Nevertheless, Dr. Jerome Gardner wrote about the toxic gases and cancer cells within the plume while others revealed the presence of viable viruses and bacteria and cellular elements in the caustic vapor. Despite these revelations, which were primarily published in a few laser and nursing journals, federal agencies refused to equate the “potentially infectious material” (“PIM”) within the smoke vapor as the same as found within the patient’s liquid blood, thereby preventing the expansion of the protection offered to healthcare personnel by the Blood Bourne Pathogen Rule.

It wasn’t until a few years ago that the discussion of plume shifted from “trace gases” and “particulates” within the plume to “nanoparticles” (“ultrafine particles”) and “bioaerosols”. The turning point was the recognition that the pollutants that result from burning (“pyrolosis”) of all carbon-based (“organic”) material, whether plant or animal, including human tissue, were the same. Once so recognized, it was no longer necessary to wait for longitudinal, double-blind, prospective studies of perioperative personnel exposed to chronic inhalation of smoke. It was now acceptable, and correct, to equate plentiful environmental and occupational clinical and laboratory research data available for non-operative situations to that of surgical environments.

Finally, as evidence of the commonality of the effects of smoke inhalation mounted, international experts convened in 2014 and, through the International Standards Organization, published ISO 16571 entitled, “Systems for evacuation of plume generated by medical devices” which provided the first universal consensus standard for smoke capture in the operating room.

In 2016, the California Nurses Association lobbied their legislature to write a proposal that would mandate smoke evacuation for all surgeries in their state. After vetoing the bill twice, Governor Brown pointed the Association in the right direction by advising them to petition the Standard’s Board of CalOSHA. Their petition was submitted and quickly approved and sent on to the Rules Committee with the suggestion that they adopt the ISO 16571:2014 standard of “90% minimum smoke capture efficiency as documented by the manufacturer” as the standard for the State of California. Their Final Rule is expected to be issued this year.

Once established, we are ready for the next chapter in our journey since the technology now exists to comply with the 90% minimum smoke capture efficiency standard.

That next chapter is COMPLIANCE to self-imposed or state-sponsored mandates. Administrators may pursue compliance at any cost while clinicians will hopefully accept the mandate only if it brings further improvement to the clinical setting; that is, for both personnel and for the patients that they serve. For example, compliance with “pencils” may be easier to achieve because no teaching is required for their adoption and they have been around for twenty (20) years but they can interfere with the surgeon’s vision and their manufacturers, who are plentiful, offer no documentation to support their use for protection of either staff or patients.

In contrast, the cell foam-based product called, “miniSQUAIR® has an independent, third party documented smoke capture percent efficiency of 98-99.5% which allows capture of nanoparticles (80% of plume) and bioaerosols (100% of airborne transmitted and most but not all of droplet transmitted bioaerosols). This published data correlates with the most recent published clinical reports that indicate that such bioaerosol capture is associated with over a 70% decrease in post-operative spine surgical infections albeit without yet showing statistical significance. Higher numbers of clinical cases should allow such an achievement according to power analysis.

Thus the administrator’s conundrum; “pencils” will favor early compliance but without any proven value while the miniSQUAIR ® will require some effort to master but offers documented evidence of value to those that utilize its advantages. Which would you choose?

NOTE:  References for the above statements of fact can be found in my previous blogs.