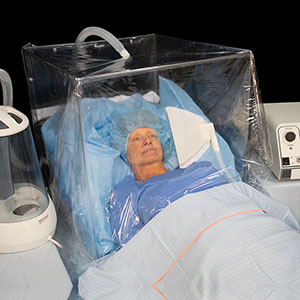 Our mission remains the same; to protect the health of the operating room team and their patients. The application of our proprietary technology, however, has found an additional function which is to capture and remove the viral-laden aerosol emitted by the COVID-19 patient who has been placed within an isolation chamber. This pivot was provoked by the questions posed to me by Dr. Christian diPaola, a spine surgeon at UMass Regional Hospital in Worchester, Mass. and Yareem Bar-Yam and Blake Elias, both from a think-tank in Cambridge, Mass. all of whom are trying to improve the management of the pandemic.

Their questions caused me to consider how Nascent Surgical could manage to contribute to the cause with our technology. Actually, the transition was not difficult since we had already documented a 98-99.5% aerosol capture efficiency (2013) and 100% capture of airborne transmitted bioaerosols (2015). The question that we thought needed to be answered was, “How can we use our technology to capture the viral aerosol exhaled by the infected patient?”

The answer reflected how the miniSQUAIR® captures surgical plume by being placed close to the source of the smoke which is the open wound and by using a strong enough suction to pull the smoke to the site of capture. The method was already established for smoke removal but how to capture the viral load that the patient exhales?

The answer was to isolate the patient within an enclosure. We chose the oxygen/mist tent, made of clear plastic, because of its proven patient acceptance for decades. Heart attack and asthmatic patients were placed within the tent for days without difficulty. What better way to contain the virus to allow for its capture than to keep it isolated within the tent? The miniSQUAIR®, placed close to the patient’s head and neck area, has an attached tube that connects to an ULPA filter specified to entrap 99.9999% of particulates as small as 0.1 um (micron). Happily, the diameter of the Corona virus is slightly wider at 0.125 um. The suction was provided by “smoke evacuators” which are currently available in most hospitals. They are either part of a fluid management machine or are stand-alone units which are light weight and can be carried to various locations when needed.

The system that we have evolved should provide that additional layer of protection for the healthcare worker because the viral aerosol is controlled and not allowed to enter the work environment where elimination will depend upon large, costly but inefficient filtration units. Capture and elimination at “point of care” is always better.

Most important is that all components of the described system are currently available at a modest price since they are made in the United States and are of high quality.

We at Nascent Surgical are happy to discuss the system with you either personally by phone (952-345-1112) or by e-mail if you prefer. We do ask that you review our web site at nascentsurgical.com before contacting us so we can have a more complete discussion of questions that you may still have.

Finally, we want to add that the system can be used by Anesthesia personnel for intubation/extubation as well as for patients on the ward or I.C.U. areas.